Port Edgar is unusual in that it is a marina which supports dinghy sailing as well as providing pontoon berths for yachts and power boats. There is a sailing school on site; dinghy racing activities at Port Edgar Yacht Club and the Scottish Dinghy Centre in the Bosun’s Locker all help support dinghy sailing.

Port Edgar Yacht Club offers dinghy racing on Mondays, Wednesdays and Weekends throughout the summer. Hardier sailors carry on with Sunday racing into December. Race training is taught at expert level as well as beginner level. The Sailing School runs the Big Blue Boat Club on Thursday evenings for young sailors; the Red Race Club is for more experienced youngsters who can join in with the yacht club’s racing on summer Monday evenings.

Dinghy berthing is available on several areas of land around the marina with a premium charged for areas close to the slip.  Berths are usually supplied with tie down points or weights and these should always be used. The changing rooms are open every day: they are spacious and have hot showers.  Renovation work was done in 2009 so while the buildings may look old, the interior is more modern and functional.

The slip is built out into the Eastern harbour over old rock outcrops (according to early 20th C maps) and the nose dries out at 1.4m. In the past the marina has made attempts to extend it by depositing hardcore over the edge, but it vanished into the mud. Boats can usually be launched at lower tides, subject to the state of the eastern harbour dredging, but recovery is more difficult. Note that at lower tides, the east side of the harbour near the wall is quite shallow so make your approach and departure from the slip close to the main pier to avoid grounding on the mud.

Dinghies may be hired from the sailing school. The range includes the venerable Wayfarer dinghy, faster two man dinghies such as the Laser 2000 and a fleet of RS Fevas – excellent small dinghies for learners. The school also has Dart 16 catamarans for hire. Two RS500s were purchased in 2010. These fast  lightweight boats with the big black asymmetric kites are often seen joining in the PEYC Monday night racing.

The main dinghy sailing area is between the two (three?) bridges although more enterprising dinghy sailors may cruise much further afield. 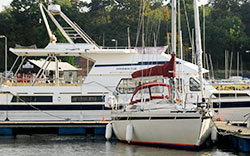